PFC monthly magazine "Letter Park" features articles on Postcrossing.
If you are a postcrosser who loves to exchange snail mails with our club members, we welcome you. (If you are not a postcrosser, of course we also welcome.)

The procedure is simple:

In Japan, we have a traditional custom to exchange summer greeting cards called "Shochu-mimai" offering best wishes to friends and relatives for the hot season.
These "Shochu-mimai" works were made by PFC advisers. 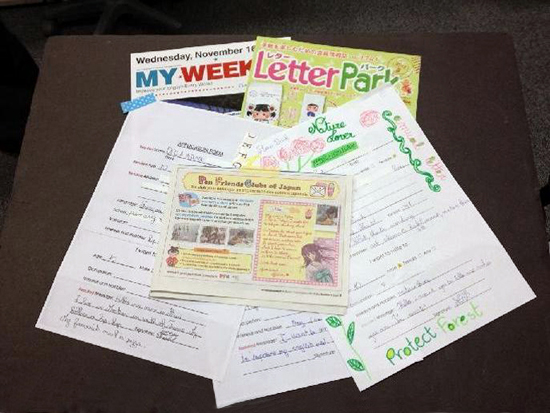 Ads about PFC was published in Mon Quotidien and My Weekly (visual), both publications from PlayBac, French leading youth publisher.
PFC secretariat has received more than 300 applications from French children. We started matching them with Japanese PFC members.
We hope that they create ties of friendship and enjoy the experience of a new world !

◆We are happy to get your letters.

"Let's write a letter in English" workshops were held by Yuda post office at Nasakejima junior high school and Towa junior high school in Yamaguchi prefecture on November 22,24.
They sent letters to schools in Russia, U.S.A., Sri Lanka, and Belarus.

We have a custom to send New Year's cards called "Nengajo".
Nengajo are delivered in the morning on New Year's Day. Receiving Nengajo is one of the pleasure of the holiday. 2012 is the Year of the Dragon (we have twelve zodiac signs).

Kyoko has corresponded with her Korean pen friend Young Jong for 3 years.
Since he knows she is interested in K-pop, he sends Korean magazines to her from time to time.
They send birthday presents and Christmas presents to each other.
Kyoko hopes to see him in Korea next year.

Japan World Stamp Exhibition "PHILANIPPON 2011" was held in Yokohama from July 28 to August 2.
65 countries and regions participated in this event. During the six days of the exhibition we had no less than 50.000 visitors. PHILLANIPPON 2011 clearly became the huge success.
PFC secretariat set up a booth named "PFC & Relief for people affected by great east Japan earthquake" to introduce the activities of PFC members and collect messages to Tohoku area (Iwate, Miyagi, Fukushima).

◆Japan World Stamp Exhibition "PHILANIPPON 2011" will be held on July 28-Aug 2 in Yokohama.

◆Here is a letter from U.S.A

Ryoko Hayashi (14years old) is corresponding with 3 pen pals in U.S.A.
Ryoko says, "The letters from my pen pals are my treasures. I look forward to hearing from them. I needed some time and courage to take a step to overseas correspondence, but now, I am aching to write back them soon. I am happy."

* PFC secretariat is waiting for your report "How`s the correspondence going?"
Please send to,

"Etegami" is a kind of letter with hand drawing and short message.
Mostly people choose familiar objects in their daily life. And it seems that technique is not so important than the feelings what you would like to convey to your friends.
It is very popular in Japan especially among the elderly people.
One day, you might receive "Etegami" from Japanese pen pals if you join us :)